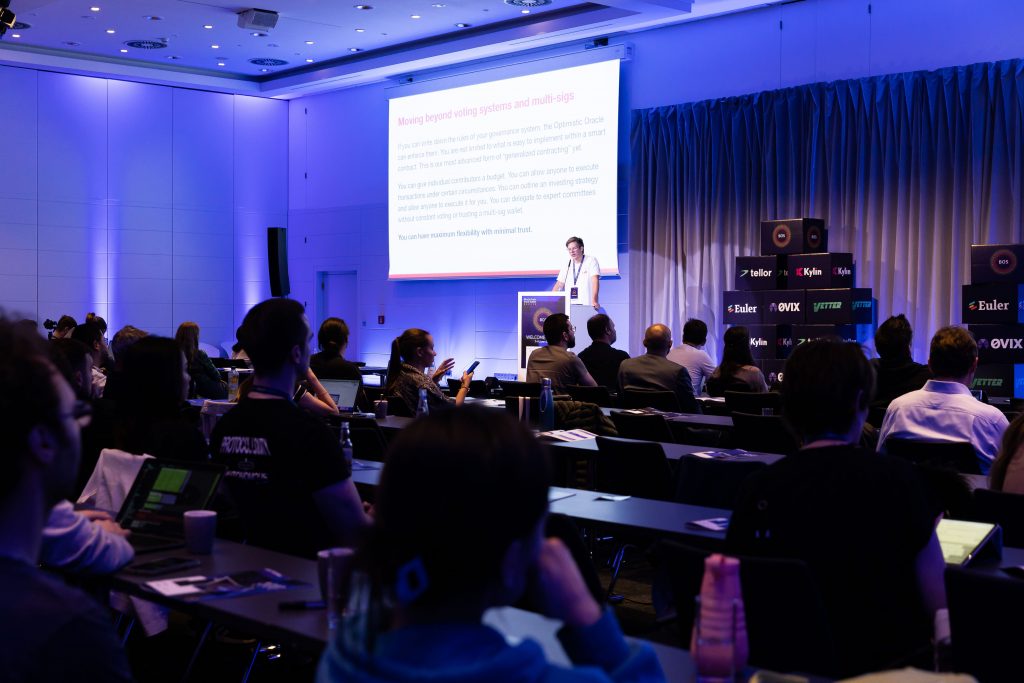 In the presentation below, UMA’s Co-founder, Hart Lambur, provides insights into how UMA’s Optimistic Oracle connects any type of real-world, subjective data to smart contracts, and the various use cases it is powering.

What is UMA?
UMA is an optimistic oracle (OO) that can verify any statement proposed on the blockchain. It tells smart contracts “things about the world” so contracts and markets asking for that data can be settled. The OO functions as a decentralised truth machine that includes human reasoning. It is flexible enough to handle ambiguity and expands what can be built in Web3. UMA’s OO  allows smart contracts to securely request and receive any type of arbitrary data, instead of just price data. It is able to process human responses to data or statements that require verification through its data verification mechanism which opens the network up to a wide variety of use-cases.

Longtail Oracles
In his presentation, Hart introduces the concept of “longtail oracles”. According to Hart, a longtail oracle is one that can report various types of data from the real world above and beyond prices. In Hart’s opinion, Web3 is currently in need of flexible  oracles like UMA’s as there is a much larger market for non price data. Most oracles are still focussing on price feeds. Some examples of data requests that can be fulfilled by an oracle like UMA’s can include “Who won the election?” and “Who won the sports game last night?”. This opens up more possibilities in Web3 and permissionless finance beyond the typical DeFi use cases of today.

One challenge for oracles is the lack of API data providing the answers to some of the more subjective questions that need to be verified. Longtail oracles, therefore, need to be able to access human judgement. Hart says a system that crowdsources truths from a network of human voters can fulfil these requests. Examples of such questions would be “did the customer service at outlet A achieve a certain stated criteria or standard?” or “Who is going to win the super bowl?”. Such questions would require human input as the answers are not readily available or pre-determined, such as price data or past election results.

UMA’s Optimistic Oracle
UMA’s oracle is optimistic, which means it relies on a true-unless-disputed verification process.  The OO’s verification process includes a challenge period in which anyone can dispute a piece of data or a statement. If there is no dispute, then the data is accepted as true. This enables flexibility by introducing the ability to bring any verifiable state of the world on-chain. In other words, an Optimistic Oracle is able to access ‘human judgement’ from its  network of tokenholders who are economically incentivized to participate and verify truth. The OO also operates at a reduced cost because only one honest disputer is required at any time. The Optimistic Oracle design provides a novel recourse, where the dispute process acts as an “undo button”. This is because if a given answer is incorrect, it will be disputed by an honest disputer and that piece of data will not be passed through the oracle system. Any other answer that remains undisputed over the challenge period will be passed through and assumed to be true. The usual challenge or dispute period for UMA’s Optimistic Oracle is 48 hours. More information about the inner workings of UMA’s Optimistic Oracle can be found in their documentation here and in this medium post written by Hart himself!

1. Prediction markets: A prediction market is a market where people can bet on the outcome of real life events such as presidential elections and sports games. Polymarket is an example of an information marketthat has integrated UMA’s Optimistic Oracle. More details about how this integration works can be found in Polymarket’s documentation.

2. DeFi Insurance: DeFi insurance refers to insurance services that help to protect users from the inherent risks of using DeFi products, such as smart contract exploits. Sherlock is a protocol built on the Ethereum blockchain that provides DeFi insurance and security analysis services. Sherlock utilises UMA’s Optimistic Oracle as the final layer of its resolution process for DeFi insurance claims. More information about this partnership can be found in this medium post.

3. KPI options: Boba Network is an Ethereum scaling solution, also known as a Layer 2 network. Layer 2 networks are separate blockchain networks built on top of existing layer 1 blockchains like Ethereum. Layer 2 scaling solutions help to extend the capabilities and ease the transaction load of the networks they are built upon. Layer 2 networks are therefore usually much cheaper to use and faster at processing transactions than Layer 1s. Boba Network uses the Optimistic Oracle to run a mining program based on KPI (Key Performance Indicator) options. KPI options are a type of synthetic tokens that will pay out more rewards if a project’s KPI reaches predetermined targets before a given expiry date. More information about Boba’s use of the optimistic oracle can be found in this medium post.

4. Cross-chain messaging: Cross chain bridges are protocols used to transfer tokens from one blockchain to another. Across.to is a cross-chain bridge launched by UMA that makes use of the Optimistic Oracle to support transactions across EVM compatible chains. EVM or Ethereum Virtual Machine compatible chains are blockchains that are compatible with Ethereum. Smart contracts can be easily migrated from Ethereum to other EVM compatible blockchains, and vice versa. Read more about the Across.to launch and its use of the optimistic oracle in this medium post.

5. DAO Governance: Finally, Hart presents  a use case for the OO that has plenty of potential:Optimistic DAO governance. DAOs or Decentralised Autonomous Organisations are community-led organisations that have no centralised point of authority. All decisions are made by having DAO members or token holders vote on proposals made by fellow members. With the Optimistic Oracle, DAO members would be able to propose rules on how the DAO should be governed and if no one else disputes the proposal within the dispute period, the proposal is passed. This allows DAOs to be managed without the need for multi-signature wallets, also known as multi-sigs. Multisigs are specific types of cryptocurrency wallets that require two or more private keys to authorize a transaction. Active DAOs today often utilise a multisig to enforce governance decisions and the Optimistic Oracle offers an alternative system where token holders themselves can determine how the DAO is governed, instead of a select few multisig key holders having the final say.

Hart cites a few projects that are doing work in the DAO governance space including Aragon DAO, Snapshot and Safesnap. Snapshot is a decentralized voting tool that is being used by various DeFi protocols to poll their users, and Safesnap is a combination of Snapshot and the Gnosis Safe multi-sig wallet that enables the decentralized execution of governance proposals. Hart illustrates optimistic DAO governance with the example of connecting a Gnosis safe wallet to UMA’s Optimistic Oracle using the Zodiac framework. This allows for snapshot votes to take place without the need for a multi-sig. As long as there are no disputes during the challenge period, the results from the vote will get executed by Gnosis safe itself. According to Hart, using this design pattern for DAO governance would make it far easier for users to interact directly with the DAOs itself, thus eliminating points of centralization. Further information on the use of UMA’s oracle for Optimistic Governance can be found in this medium post.

UMA’s work developing its Optimistic Oracle has major implications on the oracle space as a whole. By refining oracles’ ability to access real-world information and ensure data robustness with a dispute resolution system based on human judgement, UMA is paving the way for many new use cases on-chain with oracles at the centre of it all. The UMA team has even used their oracle to plant a tree every time a particular tweet was retweeted. More than 1000 trees were planted as a result of this project!