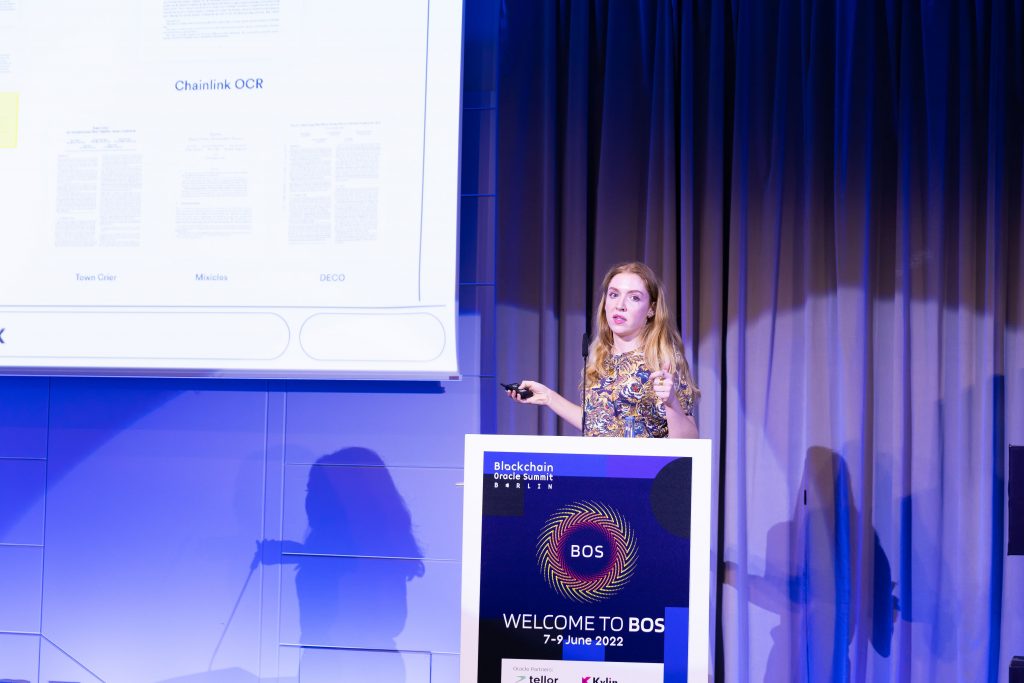 Saša Milić is uniquely placed to objectively compare oracle networks. On top of being a software engineer and data scientist, Saša is also a co-founder of API3. While she no longer works full-time at any network, Saša has worked closely with various oracle projects in the last few years, During her presentation at the Blockchain Oracle Summit, Saša  shared “a smattering of hot takes” about some of the more widely used oracle networks in the space today – including Chainlink, UMA, Tellor, Nest and BAND. In this article, we’ll guide you through her presentation, sharing some key concepts along the way.

Chainlink
The most widely used oracle network today, Chainlink has a reputation for providing consistently good data. According to DeFi Pulse (at the time of presentation), 15 of the top 20 DeFi protocols by Total Value Locked (TVL), use Chainlink, making the network a cornerstone of the DeFi Ecosystem.

Chainlink works through a decentralised network of nodes that collect data from reliable sources and aggregate the results on-chain. Chainlink refers to this as “three layers of decentralisation,” because each individual oracle network, node operator and data source is selected in a decentralised way. According to Chainlink, this eliminates any single point of failure in the network.

Chainlink, which was established in 2017, is also well-known for consistently providing reliable price data. Chainlink currently caters to the larger part of the DeFi ecosystem with a majority of the top DeFi projects using their oracle services. Some of the projects using Chainlink price feeds include Aave, Compound and Synthetix.

Out of all the oracle projects that are currently on the market, Chainlink seems to be investing the most into cryptography research. According to Saša, almost half of the team at Chainlink Labs are qualified cryptographers. Chainlink have also integrated two Cornell projects, Town Crier and DECO. Town Crier is a system that connects smart contracts to external data from trusted websites while also ensuring confidentiality of the data. DECO uses zero-knowledge proofs to verify off-chain data while maintaining full data privacy. Chainlink’s whitepapers were also co-authored by well-known cryptographer and Cornell Tech professor, Ari Juels who is now the Chief Scientist at Chainlink Labs.

Since Saša’s talk at BOS22 in June, Chainlink have announced that staking will be live later this year. Staking will provide the network with more crypto-economic security, as stakers will initially be tasked with identifying and reporting node operators that fail to meet predetermined standards. For more information on LINK staking, read this article.

UMA
At UMA, security is formalised in an economic guarantee around the cost of corrupting an oracle through their Data Verification Mechanism (DVM). The way this economic guarantee works is based on the idea that every oracle has a minimum price needed to become corrupted. In most cases, this is the price needed to take control of 51% of the voting tokens, and is called the Cost of Corruption (CoC).

On the other side of the CoC is the potential Profit from Corruption (PfC). This is the maximum amount of money that can be gained from corrupting an oracle. Therefore, if CoC is kept above PfC, there would be no economic incentive for someone to corrupt the oracle. UMA is designed to measure the PfC of all the contracts in their system, then keep CoC above that number through a series of token buybacks that are triggered when necessary – more information can be found here.

UMA also employs the concept of the “Optimistic Oracle”, based on their dispute resolution model. In essence, when a contract requests for data – the “requestor” – anyone can propose an answer – the “proposer”. The proposer needs to post a bond together with their data.

Anyone else can then verify that data, and raise a dispute to UMA’s DVM if the data is incorrect – the disputer. If no one disputes that data within a set amount of time, the proposer’s bond is released back to them, and they are paid a pre-agreed fee. Because disputes are economically incentivised, a lack of disputes can be seen as verification that a piece of data is true. This mechanism is what makes UMA an ‘optimistic’ oracle.

Tellor
Tellor was one of the earlier projects to talk about Oracle Extractable Value (OEV). Simply put, OEV is the potential profit a party could earn by being in the position to update the oracle. Similar in principle to Miner Extractable Value (MEV), if only one party is allowed to update an oracle, then they would be in a unique position to take advantage of the difference in prices before they make the update. For example, if party A has control of the ETH/USD price feed updates on a certain exchange, then that party can simply make trades before updating the prices, since they know which way the price is going.

Tellor approached this potential problem by building an oracle protocol that is truly decentralized, allowing anyone to be a data provider. In fact, their protocol takes advantage of OEV as a means of making payments to oracle data providers rather than using gas fees. A more in-depth explanation of OEV can be found in this medium article written by Nicholas Fett, CTO of Tellor.

Tellor has also been integrated as a fallback oracle in the Liquity protocol’s dual-oracle system, which is significant given the effort that the team at Liquity has put into oracle research and their top position on the DeFi Safety list.

Conversely, Tellor’s dispute resolution system has a natural paradox. The system works by paying people to dispute incorrect data. If they raise their dispute successfully, they are paid in Tribute (TRB), Tellor’s native token. The presence of disputers therefore works to discourage false reports in the first place. However, since disputers profit from reporting faulty data, discouraging false reports actually would decrease the demand for disputers, since no faulty reports means no one can profit from disputing. This in turn leads to no one watching the data to dispute its accuracy, which then creates more opportunities for false reports.This, as Saša  notes, is not a problem unique to Tellor, but is common in optimistic oracle systems.

Nest
Nest is currently only used for price feeds, and the data for these prices is provided by miners. When miners report a price, they have to put up the same amount of money that they are reporting. This means that if they indicate the wrong price, it creates an opportunity for someone to take advantage of the difference between the reported and actual prices in order to make a profit.

Band “Cross-chain data oracle”
According to Saša’s research, Band Protocol has relatively high adoption within DeFi projects. Despite that, there has been only one known exploit of Band, indicating their overall reliability.

Band’s design goals are  speed and scalability – to process a large number of data requests within seconds; cross-chain compatibility – to be able to serve most of the available blockchains; and data flexibility – to handle different types of data and the different ways they are retrieved. This, according to Saša, is lacking a key area – security.

Band also runs a separate blockchain called Bandchain. This makes it harder to evaluate its security, because the security of the oracle is dependent on the overall security of this sidechain – explained here by CoinDesk.

Additionally, BAND holders do not participate in validation directly on Bandchain. Instead, they delegate their tokens to validators, who run validation nodes and retrieve data from the data sources. In each request, validators are randomly selected to retrieve and verify the data before committing them to the blockchain – more information about their system can be found here . Given the vital role that validators play in this system, Saša  is unsure if the low number of validators (67 active at the time of publication, based on Cosmoscan)

The Blockchain Oracle Summit was the world’s first conference to focus solely on the importance of oracles and their design. Leading builders and researchers from around the world gathered in Berlin to share their work and discuss challenges faced with a close-knit group of hardcore oracle enthusiasts. To keep up with more of Saša’s hot takes, be sure to follow her on Twitter.