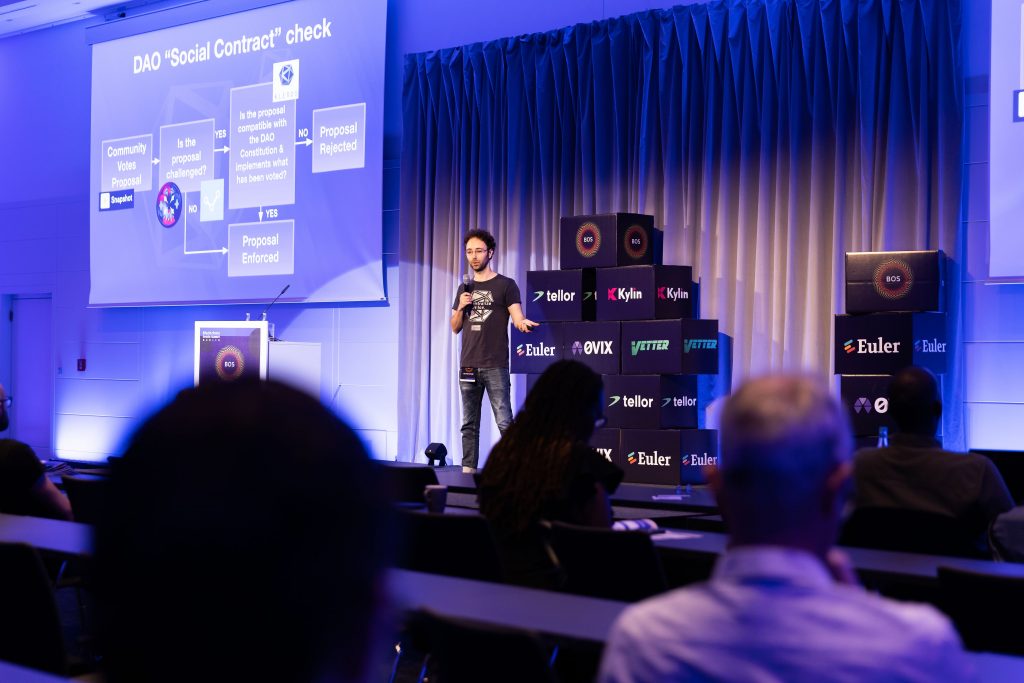 In the presentation below, Clément Lesaege, co-founder and chief technical officer of Kleros, presented on the integration of subjective oracles for executing DAO decisions and the role Kleros could play in the evolution of DAO governance.

Below are the highlights of his presentation.

What is Kleros?
Kleros is a decentralized protocol built on the Ethereum blockchain that leverages crowdsourcing and game theory to arbitrate disputes quickly, and economically. The organization was founded in 2017 by Dr Federico Ast and Clément Lesaege to bring “justice for the unjusticed” just as Bitcoin brought “banking for the unbanked”.

The protocol’s core product is the Kleros court, where disputes are settled through a majority vote by randomly selected jurors incentivised to participate using $PNK. $PNK is the native token of the platform and is used for choosing and paying jurors, protecting from Sybil attacks and making governance decisions. To become a juror, one must stake between 1000-1600 $PNK and have skills which help solve disputes, such as the knowledge of HTML and Javascript. Jurors who vote wrongly are penalized by having their tokens slashed.

In addition, Kleros offers products like Oracle, Escrow, Governor, and Curate, which settle disputes related to e-commerce, insurance, intellectual property and many other industries. The platform is used by dApps like Uniswap, Gnosis, Polkamarket etc. and can be used by any online services on and off-chain.

Current Challenges of DAO Governance
During his presentation, Clément emphasised the challenges currently experienced in governing DAOs. The first limitation is based on an in-built feature of most DAOs known as coin voting, which refers to the use of a native token to allocate voting power among the community. It follows that ‘whales’ or investors with financial backing will control the voting process and pass laws that favour only themselves.

Another limitation of coin voting is vote buying. Vote buying occurs through protocols like Bribe and Paladin, where token holders deposit their governance tokens in exchange for dividend earnings. The protocol auctions off their deposited tokens to other users who can now make decisions which affect the DAO.

In most cases, DAO token holders resist this form of bribery. However, voting power can still be bought on any decentralized lending platform like Aave, Maker or Compound in a process referred to as obfuscated vote buying. In this form of vote buying, users stake Ether (ETH)  as collateral to  borrow the governance token, vote and then pay back the token debt with interest to withdraw their ether.

Another major limitation of coin-based governance is off-chain voting and the use of multi-sigs.. DAO voting usually occurs on alternative networks like Snapshot and Upstream so that members can avoid the cost of gas fees and the slow pace of voting. However, votes conducted off-chain require a group of signatories to record the results on the blockchain. This increases the centralization of power and endangers the entire network.

In Vitalik Buterin’s article about the need for DAOs to evolve beyond coin-voting governance, he addresses these issues and encourages alternative systems to  coin-driven governance such as Proof of Humanity to make the voting process more inclusive and fair.

How Subjective Oracles Can Change Voting in DAOs
Typically, smart contracts fulfill transactions based on objective data, such as price data or weather reports, rather than subjective judgment. By shifting to subjective oracles, which are streamlined  to be more flexible and handle more specific tasks, DAOs stand to gain an exponential increase in the applications of smart contracts, especially in voting processes.

One example of this is the replacement of multisignature or multi-sig wallets used in the voting process with subjective oracles.. Unlike regular wallets, multi-sigs require more than one signature or private key to approve a transaction. They are useful in ensuring that certain votes or upgrades can only occur with the approval of the majority of signers. While multi-sigs can provide greater transparency, important decisions are still made by a small handful of multi-sig signers.

According to Clement, rather than relying on a small group of individuals to validate the off-chain transaction or vote, DAO contracts using subjective oracles to verify results on-chain can be used instead. Kleros,  Proof-of-Humanity  and the UBI DAO are examples of projects using this system. Learn more about the advantages and disadvantages of multi-sig wallets in this Cryptopedia post.An alternative to this method is also available for DAOs that have already implemented multi-sig voting.. The 1Inch DAO has integrated the Gnosis Zodiac Reality Module, which allows both off-chain Snapshot proposals and Discord polls to trigger on-chain transactions so that anyone in the community can execute without having to rely on a smaller group of signatories. In addition, Kleros serves as the arbitrator in case of any oracle disputes on the module.

When DAOs use these available modules instead of multi-sigs, , they improve their voting systems’ decentralization, autonomy and fairness. But is this all subjective oracles can do?

Other Uses Of Oracles & How They Could Facilitate the Separation of Power in DAOs
DAOs were created to give power to the community, but constant voting and lengthy discussions render the organization inefficient.  Clément proposes applying a system of government commonly used in Nation States, consisting of  separate Legislative, Judiciary and Executive roles, to DAOs

In this system, the Legislative, i.e. the community, would be able to make or change laws by voting on platforms like Snapshot. The executive team, which consists of the core developing team, will then oversee and implement these decisions. Lastly, the Judiciary arm would consist of a court of jurors and a subjective oracle like Kleros + Reality.eth. Here, executions made by the executive will be held against the established laws and verified. Dividing the duties between arms of government prevents bogged-down voting processes and reduces the chances of uninformed voters passing disadvantageous laws.

According to Clement, subjective oracles could also play a major role in governing fund allocations. Incentive programs, salaries, bounties and other inter-DAO agreements are rendered enforceable with the separation of powers as well . This builds credibility and trust in the DAO because they cannot renege on contracts. Furthermore, subjective oracles would allow the creation of DAOs that execute transactions based on a specific set of rules, without the need for any token holders to enforce decisions. This enables the creation of DAOs for ‘smaller’ activities like account recovery and event reporting.

Looking Forward…
The need for arbitration platforms like Kleros was evident in May 2022 after the Terra crash. Insurance protocols like InsurAce confirmed they’d pay over $12 million to their users, while Unslashed Finance’s decision to work with Krelos helped to secure several millions of dollars of claims.

These statistics and more confirm that decentralized arbitration will become exponentially important as the crypto ecosystem expands.

The Blockchain Oracle Summit was the world’s first conference to focus solely on the important role of oracles in the wider blockchain ecosystem and their limitations. Leading speakers from across the world gathered in Berlin to share their work and experience building and using oracle solutions.